Karate started on a small island off Japan, called Okinawa. The Okinawan people were forced to find a way to defend themselves against armed invaders. In secret, and without any weapons, they developed a martial art called Karate-Do, which means ‘the way of the empty hand’. Several different schools of Karate originated in Okinawa, but we practice a very traditional style called Goju-Ryu. This literally means ‘hard and gentle school’.

Goju-Ryu was founded by Master Chojun Miyagi in the late 1920s, who studied for years with Kanryo Higoanna. After Miyagi’s death, Ei’ichi Miyazato continued his teachings.

Goju-Ryu is a close range self-defence system, it is characterised by circular blocks, joint manipulations and kicks to the lower body. Dynamic tension and breathing are a big part of the training, and are included in many katas. 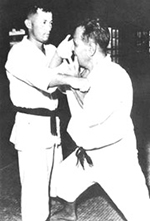 Kanryo Higoanna was born in Naha, Okinawa on 10 March 1851. At the age of 14 he began his formal training in Chinese Kempo with Seisho Arakaki, who studied the Fukien style. In 1866 he travelled to China to continue his studies.

In Foochow he was introduced to Ryu Ryuko. After following the age-old tradition of personal service, that included working in the garden cleaning and doing chores, Higoanna was accepted as a student. Training was grueling, but he was soon known among the locals as one of Ryu Ryuko’s best students.

It is rumoured that for up to six years he only trained Sanchin kata. Only much later was he taught the other katas – Saifa, Seiyunchin, Shisochin, Sanseru, Sepai, Kururunfa, Seisan and Suparinpei. He also studied traditional weapons and herbal medicines. After 13 years he returned to Okinawa and began giving private lessons. In 1905 he began teaching at a public high school and was considered one of the best karateka in Okinawa.

He developed the Naha-te style, and based on his teachings many of his students, like Chojun Miyagi, formed their own style. He died on 23 December 1915 at the age of 63. 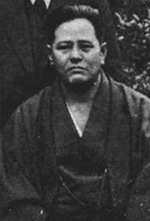 Chojun Miyagi was born on 25 April 1888 in Naha, Okinawa, to an aristocratic family. He began his formal training at age 11 in the dojo of Ryoko Aragaki. At the age of 14, he was introduced to Kanryo Higoanna, founder of Naha-te. After a period of doing chores for sensei Higoanna, he was accepted as a student.

Sensei Higoanna was a demanding teacher, and training included running and strength training, and students often fainted during Sanchin kata (breathing kata). Miyagi trained this way for 13 years and developed into a very powerful karateka. He then travelled to China on a quest to find Master Ryu Ryuko, with whom Higoanna had studied. He could not find him, but during his travels, he studied other local martial arts.

In 1926 at the age of 38, he established the Karate Research Club with Chomo Hanashiro (Shuri-te), Kenwa Mabuni (Shito-Ryu), and Motobu Choyo. They spent the next three years focusing on basics, kata, fitness, and philosophy.

At a tournament, one of Miyagi’s senior students was asked which school of Karate he belonged to. He was unable to answer that question, and Miyagi agreed that they should name their unique style. While trying to name the style, he came across a Chinese text called the Bubishi. It included the ‘Eight Poems of the Fist’ and the third precept read, ‘the way of inhaling and exhaling is hardness and softness. Go means hard and Ju means gentle’. Since his style was a combination of these ideals, he named his style Goju-Ryu.

In 1933 Goju Ryu was officially registered at the Butokukai, the Japanese Martial Arts Association. The next year, he was appointed as the head of the Okinawan branch of the Butokukai Association. The Ministry of Education commended him for his outstanding service to physical culture. He later received the Japanese equivalent of this commendation.

During the Allied occupation of Okinawa Miyagi lost his a son and two daughters, as well as a senior student. He was forced to stop his training. However in 1946 he started his training again, and was appointed as a director of the Okinawan Civil Association of Physical Education. He opened a backyard dojo, known as the Garden Dojo.

It was here that An’ichi Miyagi, Seiko Higa, Meitoku Yagi, Ei’ichi Miyazato, Seikichi Toguchi and Teruo Chinen trained with him. Sensei Miyagi died on 8 October 1953 at the age of 65 of either a heart attack (the most popular theory) or a cerebral hemorrhage. Following his death, four of his most senior students opened their own dojos.

Seiko Higa was sensei Miyagi’s immediate successor; Meitoku Yagi formed the Meibukan, Seikichi Toguchi the Shorei-kan and Ei’ichi Miyazato the Jundokan. In 1963, Meitoku Yagi officially became the new head of Goju-Ryu. Gojen Yamaguchu, who studied with Chojun Miyagi, promoted the style in Japan and formed the Japan Karate-Do Federation Goju-Kai. One of his students, Peter Urban, introduced the style to the United Stated in 1959. Gojen’s son, Gosei, moved to San Francisco in 1964 and established the Goju-Kai Karate-Do. 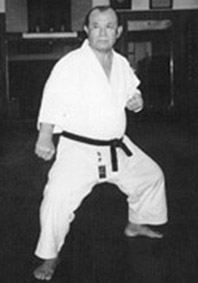 Ei’ichi Miyazato was born on 5 July 1922 in Okinawa and passed away on 10 December 1999 due to ill health. Miyazato began his karate training with his father when he was 13 years old. He became a student of Chojun Miyagi at the age of 15. As a beginner, he practiced hojo undo (supplementary exercises) and kakie (sticking hands) and developed tremendous strength. During this time he also began studying Judo. Famous for his ashi barai (foot sweep), he eventually became All Okinawa Judo Champion. He was a seventh dan in Judo.

Except for a short time during WWII, Miyazato remained with Chojun Miyagi until his death in 1953. Miyazato often assisted Chojun Miyagi teaching at the Garden Dojo, and under his guidance also taught at local high schools. Following Miyagi’s death in 1953, at the request of his fellow students and Miyagi’s family, Miyazato continued teaching at the Garden Dojo (Miyagi’s dojo).

He was also the instructor at the Ryukyu Police Academy where he also taught Judo. He assumed the responsibility of preserving the Katas, principles and the future of his teacher’s Karate-Do system, Goju-Ryu. Miyazato Hanshi opened his own dojo in 1954 and in 1957 built the Jundokan (House for the following in the footsteps of the father) in the Asato district of Naha. This three-story structure included both the Jundokan Dojo and his home on the top floor. He is noted for continuing to teach in the traditional way he had learned from Miyagi.